When a wheel falls off 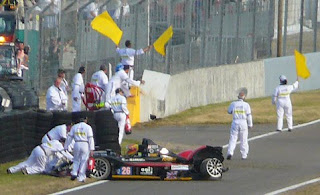 The Power of the Analogy
Every year I make the pilgrimage to Le Mans for the famous 24 hour race.
Being me I can't help thinking about the parallels with service management and the lessons we can learn from the teams.
Before I continue a word about analogies. It strikes me from time to time that there are people in the IT industry who do not see the parallels between what IT does and what other specialisms do.  I guess it doesn't matter that they don't get some analogies, after all when we are teaching, for instance, the use of an analogy is only one way to get a point across and you need to appeal to different mindsets. When it does matter though is when what another specialism does is directly analogous to what we do in IT and has valuable lessons for us to learn about the right way of doing things.To disregard how the engineering community carry out Root Cause Analysis, for instance would be both supremely arrogant and irresponsible.
Recognising we have lessons to learn from outside IT is a major driver for making improvements. Here is one interesting story:
I'm afraid my insights based on Le Mans aren't going to be quite as vital as that.
Lesson Number 1: Things will go wrong
At the start of Le Mans several million pounds worth of cars are lined up on the grid. For every team this is THE race of the year. Winners of Le Mans, both drivers and cars, go down in motor racing history. Every single person involved with those teams is committed to....well winning the race or your class would be great but the 250,000 spectators at the track (Yes you read that number right) all know that just getting to the finishing line 24 hours later is a massive achievement.. The current record for distance covered during the race is 3,235 miles. That works out at an average of 135mph, though the highest speed actually recorded for a car at Le Mans in 248mph.
So, things break, or get broken.
And the teams expect that, so even though they have spent a lot of time and money trying to make sure things won't break they also plan for what will happen when they do break. That means:
They design things to break
It is much better to have a minor component break in a known way than to have a major component blow up. So you sacrifice one component and the car limps back to the pits. Did I mention that if anyone but the driver touches the car whilst it is on the 8.5 mile long circuit the car gets disqualified? Don't worry about the guy in the photo at the start of this post, he is actually in the start of the pit lane, though that isn't where he was at the start of the crash. How did it get like that? I'm afraid one of the Aston Martin cars hit it and slammed it in to a wall. That wheel at a crazy angle  is an example of what I'm talking about, the suspension has sheared off at points deliberately weakened to protect the main structure of the car. 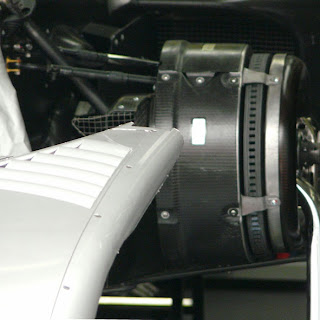 They design things to be fixed
End of the race for the 26 car above? Not yet. The crash happened about 7.30pm, by  2am the car was back on the road. Remember this isn't a little shunt on the high street, this is a crash that saw the car slam into a concrete wall at high speed. How did they do it?
Here's a picture I took in the pits before the race. Can you spot what is missing? 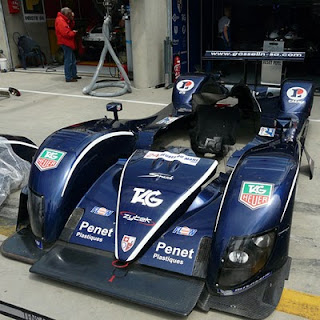 Every component is designed to be removable, and the mechanics train on how to move and replace them.
People Are in the Right Place
The pit lane at Le Mans is a dangerous place, and those garages where they have to do any major mechanical work are about the same size as a large domestic garage. You can't have hundreds of people milling around. The team management are normally on the pit wall keeping an eye on the telemetry. The drivers who aren't in the car are asleep in a motor home, and the bosses, the sponsors and the guests are in the hospitality suite above the garage.
And Finally...
You can do a surprising amount with gaffer tape and a hacksaw, but a final top tip is some of the teams swear by using a certain brand of  fizzy cola to clean the flies off the windscreen  - but make sure you wash it off well and don't try it on a computer.
And for those who just like the cars...
Here's a slide show of the rest of my photos from the 2009 race
Le Mans 2009
Posted by James Finister at 12:56