"Historians often hide from us the real path of history behind their errors, different opinions and false tales"
I have a good friend who is a doctor and a psychiatrist. She knows very little about the world of business which makes her observations on the world of management quite refreshing. To put it another way, she tends to see through the b******t and posturing. When we meet up it is usually to go to  a lecture on one of the subjects we share an interest in, be it psychiatry, psychology, philosophy or pseudo-science.
Last year we got a last minute chance to hear Malcolm Gladwell speak.
It was, I guess from talking to others, a typical Malcolm Gladwell experience. An adoring audience. A wholly scripted speech that was so well rehearsed it appeared off the cuff, a gripping storyline and a lovely little moral. In this case "However well prepared you are don't be over confident because something might happen that will trip you up." It was a fun, entertaining and rather expensive fifty minutes. It was worth it though to get such a deep insight into the....no hold on this is where my friend looks at me and says "That was s**t" , despite the fact she has a mega crush on him.
The same story, the same facts about the Battle of Chancellorsville could be used to tell any number of other neat stories. You could even make a case that Hooker lost the battle because he wan't confident enough , not forgetting that you could cherry pick another battle to support another view.
Having heard the story what can I do with it? How should I change my behaviour to get any benefit from it? How do I reconcile it with other Gladwell anecdotes?
You have to hand it to Gladwell though, he speaks with confidence and whilst you are listening to him it all makes perfect sense.  If you get the chance go and hear him speak.
Don't wait for a chance to go and hear the next speaker I want to talk about. Instead do everything in your power to go and hear him speak, and take as many people as you can along with you.  In fact if you can arrange a speaking event for him.
Ben Goldacre  is a doctor and a science journalist. He writes a science column for the Guardian newspaper, and in 2008 published the brilliant book Bad Science.
This genuinely is a book that if taken seriously could save lives. It attacks the  self serving, scientifically unfounded and deliberately distorted thinking that prevents effective health care strategies from being delivered and leads to many deaths.
He is passionate about the need for evidence based medicine.  You can hear him speak here about the importance of  meta analysis
His talks are free.


And my friend has an even bigger crush on him
The Pictorial History of The Rhinoceros
For  many years the best known drawing of the rhinoceros was a woodcut by Durer made in 1515. It was based on a description of a rhinoceros that lived, briefly, at Lisbon zoo.  It was the last rhinoceros seen in Europe until the arrival of Clara in 1741 and throughout that period Durer's woodcut was considered the most authoritative depiction of a rhinoceros.
So it is a pity he gave it a horn on top of the withers, scaly legs and dragon like armour amongst other fanciful embellishments. 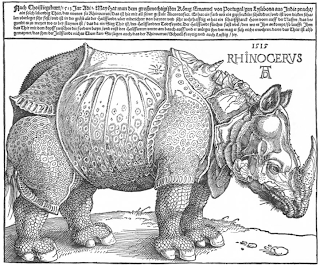 What seems likely is that Durer added his own interpretation of the description, and those  following afterwards would not have noticed what his imagination added because it still appeared to match the description. It was armoured, and it did have two horns, for instance.
Not only that but a 1752 edition of a catalogue of Roman coins appears to depict a Roman rhinoceros looking just like Durer's.  So did Durer's embellishments come from knowing what the Roman's thought rhinos looked like, or was the authority of Durer's drawing such that it influenced the person drawing the Roman coin to see details that were not there?
Why did Durer's drawing endure? Perhaps for no better reason that that people found this image of the rhinoceros attractive and it resembled what they wanted a rhinoceros to look like.
The Dangers of Second-hand Knowledge
If we hear an attractive story from someone like Gladwell, or are shown a compelling picture like Durer's woodcut we are inclined to believe it and loath to let go of it.  In the ITSM world there are people who never bother to ask if the story is true, if the conclusion is sound, or if the diagram makes sense.  Then they go and repeat the story and copy the diagram and tell everybody who will listen, and some who won't, that "This is the truth about ITSM"
How do they know it is the truth? They read it on a PowerPoint slide.
Rather like the strange link between the woodcut and the coin you sometimes even have  a distorted version of your own ideas and diagrams ,that you'd discarded as dated ten years ago,  placed in front of you, quite innocently, as somebody else's original  new great idea.
We love to have complex realities reduced to simple stories, but that doesn't make those stories either true, or useful.
And here I confess that the quote with which I started this post is extremely second hand. It comes not from some revisionist historian late in the last century, but from Sebastiano Errizo writing in 1559.
For that quote, and more on the story of Durer's Rhino, I am indebted to and  recommend The Rhinoceros of The Pope
Posted by James Finister at 11:44