A Flying Visit to ITSM 13

This year the TCS speaking slots at the itSMF UK conference were in the capable hands of my colleagues Martin Goble, Andrea Kis and Martin Neville so I thought my attendance would be overkill.

However at the last minute I decided to pop in, primarily to hear the latest updates from AXELOS update. Oh yes, and for the gala dinner.

Since it was a very quick visit my impressions are just that, and not an in depth analysis of the event.

First of all I think the move to Birmingham is a good idea. Those of us who attended the SDI conference back in June will know that Birmingham is a lively place and the ICC is right in the middle of things. 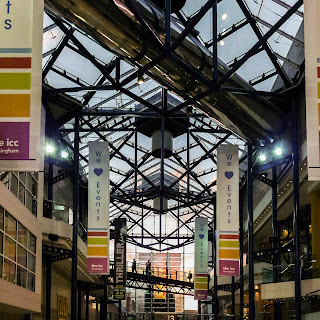 Also familiar to visitors earlier in the year would be the helpfulness and friendliness of staff at the venue which wasn't always the case in Hammersmith.

Personally I found the exhibition space a big improvement with much more space for mingling and chatting. Having said that none of the exhibitors I spoke to claimed to have been rushed off their feet with the number of visitors. I also noticed that a lot of visitors weren't making much effort to talk to their fellow delegates. This for me remains the big contrast between the itSMF conference and the other shows we attend.

A good number of people turned up for the AXELOS  update. Whilst they continue to make all the right noises in terms of intentions I'm afraid a lot of people are echoing Aale Roos' concern that the newly announced maturity assessment appears very old fashioned and cumbersome and very far from what we would consider current good practice.

It is tempting at this point to talk about how the SM Congress that arose out of Fusion 13 in Nashville was being talked about, but to be honest I think Rob England's post  from the other side of the world mirrors the general response. Incidentally we did an ITSM RoW podcast to discuss the SM Congress with Charles Araujo. Click on that link and you'll see we are moving the podcasts to become hangouts.

The only other part of the event I can comment on is the dinner, which was as enjoyable as ever with great company.

And that brings me to the absolute highlight for myself and several others which was that this year's Paul Rappaport Award for Outstanding Contribution to ITSM was awarded to Stuart Rance. I know from working with Stuart both on the Back2ITSM initiative and in the AXELOS workshops just how well deserved that award is.

Finally a big thank you to Ben Clacy and the itSMF team for making it all happen. As most of you will probably know Ben is moving on to a new challenge and I would just like to record how much I've appreciated the changes he has made to the itSMF during his tenure.