The Start of a New Week

As the lift doors opened before him Brandon Lane had a brief image of herds of wildebeest, zebras and other prey animals on the African plains. He pushed his thoughts of outsourcing aside as he in turn was pushed aside. The culprit was wearing a T-shirt that was already smelling surprisingly stale for so early on a Monday morning.

Brandon had spent some time thinking about how he was going to make his first appearance as CIO.

It was a wasted effort.

His presence on the first floor was greeted with more indifference than patch Tuesday. It made him wonder why his predecessor  was known for his habit of using the fire escape to get to his office with the minimum chance of making eye contact with the staff.

Wandering between the quasi-cubicles Brandon recognised the dull green coffee stained carpet as being the design that had been stripped out of the rest of the building three years ago. Although it was several years since the IT staff had been prised out of the actual basement, now given over entirely to the machines, the first floor was still referred to by others as "The Basement" and Brandon could see why.

One thing was very clear, IT didn't get the idea of open plan offices, and they clearly weren't too keen on natural light either. Not only that but... [Editor's note: The rest of this passage has been removed to avoid causing offence to any readers working  in IT who believe that the business retains a stereotyped and outdated perception of what IT staff are really like.]....would all have to change, as well.

It came as a shock, as he stopped to look at yet another developer's twin screen set up with an 'interesting' screen saver, to actually be spoken to.

"Hi Brandon, what brings you down here? Lost your dongle again?"

It was Kelly, one of the Help Desk team leaders. Except he wasn't allowed to call it the Help Desk any more, it was a Service Desk. Brandon wasn't sure he'd noticed any difference since the change.

He got on well with Kelly, most people did, she was a likeable person. Brandon sometimes wondered if she had to work hard at it or if she was just like that naturally.

"Hey tell me about it. Someone put in a couple of changes over the weekend and the phones have been going crazy. So a typical Monday really."

"So why aren't you busy on taking a call then?"

"Ohh, like you are my boss now, Mr Auditor? We've got it all under control, at least my team has."

Brandon smiled, he knew Kelly could shift persona in an instant depending on who she was talking to and what the situation was, that was one of her skills. It was a skill he was about to test out.

"Kelly, just out of interest, who is your boss?"

"Richard, oh he doesn't get in until after nine on a Monday."

A glance at Kelly's face, which wasn't much of a hardship on Brandon's part, showed that cogs were whirling and pegs falling into place.

"Or did you mean Jacques? There were some odd things going on last Friday, Maarten from security was involved. Is there something I should know?"

Brandon sighed. It was going to be a long first day.

"You mean no one has told you anything about the changes? Jacques has gone and you've got a new boss."

By now every peg and cog was in place. 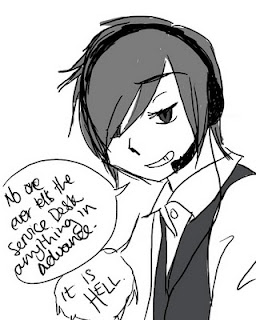 Illustration copyright Kelly Greening 2010
"No one ever tells the Service Desk anything in advance, it is Hell. A new boss could change all that"