This has been my quietest ever year for blogging. Partly that is because of how I use the Back2ITSM Facebook group, partly it is because a lot of things have been happening in the day job, with a restructuring and a new role. On top of that we've moved house to the other side of the country, downsizing in response to the children being thrown out leaving home.

Oh, and I also started building a railway. 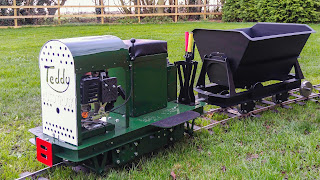 Looking back on my predictions for 2015 I think I did rather well. Well sort of of.

People will realise that not every one claiming to be a SIAM expert is what they seem.

I certainly saw some evidence of this during the year. There are still people out there claiming expertise who are still purely theoretical, who are extrapolating universal truths from a single experience of "implementing" SIAM, and who have no operational experience in the area.

I'm glad to say that at conferences at least audiences seem more able to distinguish those speakers who have coal face experience.

People will start talking about "SIAM and...

Well they did if they spent any time in the same room as me. There is a slowly dawning recognition that SIAM needs to be considered in context of other developments and approaches, not just being bolted on or left to take its chances in a battle of the frameworks,

It really was a no-brainer to suggest that this would primarily be DevOps. However from a personal perspective it was CX/UX  that I found myself talking about the most.

People will start talking about having a career structure in ITSM again.

A conference that breaks the boundaries by including  ITSM, project managers and architects

Well, you can't win em all.

The Unfortunate Rise of Paint by Numbers SIAM

This has become more and more apparent at conferences this year. There are a group of people out there who have yet to grasp just how hard SIAM is, and that they lack the fundamental skills to make it work. They believe that all you need to make it effective is a new organisation, some process guides and refreshed job descriptions, despite their long track record of failing to get the basics right. They will be pandered to by the new breed of instant experts in SIAM.

Fortunately this will be balanced by...
Second Generation SIAM

Many of the initial SIAM  contracts are coming up for renewal, A lot of lessons have been learned, and a lot of changes have been made. Expect a lot of action in this space, with a lot of incumbent SIAM partners becoming undeserving sacrificial victims of poorly thought through first generation deals.

The Death of Process Centricity

For a long time now I've been arguing that whilst the core content  and intent of ITIL might still be relevant the way we build ITSM solutions and how we expect users to interact with them is fundamentally flawed.

Too many people still think:

- You can design processes in isolation
- Everything is a process
- If the process conforms to ITIL then it is fit for purpose
- Adopt and adapt means we can claim it conforms to ITIL  even it doesn't
- Users will use systems in the way we expect them to
- Services map directly and neatly on to applications, customers and suppliers
- Measuring effort and failure is the same as measuring value

When I was an undergraduate AI was one of my pet subjects, In the early days of my career I played around with virtual flatworms . One day I thought, all this might come in useful.

Well I'm pleased to say that in an ITSM context that day is fast approaching. In TCS we have already developed our  Ignio solution and you can expect to see us leveraging it on more and more ITSM accounts.

So that is it for another year, except to say thank you to all of you across the international ITSM community who have once again been excellent, entertaining and enlightening company.