This year was the 21st itSMF Conference. I nearly didn't go. I'm glad I did. Some people didn't.

What more do you need to know?

The event has settled comfortably into the two day London based format and this year everything from registration through to the pacing of the awards dinner seemed slicker than ever. The two day format does come with a couple of catches. A 9.15 start makes a very long day for those of us traveling to the event  on the Monday. I had to be up at 5 am and found my bed at 1 am . Needless to say others were up much later than that in the bar enjoying the now mandatory piano sessions with Matt Burrows and Barclay Rae. With only two days and six streams the chances are also higher that interesting sessions are going to clash with each other.

What one person finds interesting might not be what others want to hear. I'm very conscious of this whenever we discuss events on the podcast  because we go to so many conferences that it is hard for us to judge their value to first time and practitioner attendees. Most of the feedback I heard was positive, and that certainly came across in the two very animated conference review podcasts we recorded and which should be out soon. I've also got Andi Kis to write a review from her perspective as a practicing service manager.

Talking of feedback I was disappointed by the low level of Tweeting going on using the #ITSM12 hashtag. Mostly it was the usual suspects, which was fine but they also tended to all be in the same sessions. It would have been good to have had tweet walls around the venue as well instead of the odd single, and often very out of date tweet going up on the screen. Whilst I'm talking of feedback the conference app was a useful tool but could do with a few tweeks to make its use more obvious.since it took me quite awhile to discover where the session  feedback button was. Perhaps I'm just a bit slow when it comes to all this technology malarkey.

So what about the sessions?

Simon Wardley was an interesting opening keynote speaker who delivered the sort of data and content rich material I like. Others in the audience I spoke to seemed to like it too. I'm not sure if any of us took in everything he said but for me it certainly kick started a conference experience that was about disruptive evolution rather than desperately trying to maintain the status quo.

Being the TCS European Lead for Service Integration I couldn't really resist Steve Morgan's session on Service Integration. It was one of many sessions this time around that I thought would have benefited from a longer time slot because SI is a big topic with lots to debate. I believe an upcoming itSMF London  and South East Regional group meeting in January is going to do just that with Kevin Holland scheduled to be one of the speakers. As for Steve's conclusions, well it is interesting to see that all of us involved with SI recognize that it is a developing area and neither suppliers nor in house IT departments are really up to speed on it yet.

Speaking of Kev Holland I missed his session on Service Integration and the cloud so I had to wait until we recorded the podcast with him to discover that "What the Romans did for us" was to coin the phrase caveat emptor. I still don't know what Boris Johnson did for us though.

If I'm honest I was a little disappointed in the one practitioner war story session I went to. Angela Wint from Merton Council has been a great guest on the podcast and was a well deserving winner of the 2011 ITSM Champion award so perhaps my expectations were set too high and in contrast to Steve's session I thought the material on introducing self service was stretched out to fill the slot. Others raved about it though.

I missed out on a lot of the official conference activity over lunch and the early afternoon whilst having the sort of intense ITSM conversations that only happen at an event like this. I'm sure I'm not alone in finding  the networking and discussions that take place provide a lot of the value of attending these conferences. For me it was a personal delight to meet up with so many international speakers and visitors, especially those I hadn't seen since Pink 11. Equally it was enjoyable to broker some introductions between my connections.

It wasn't until I was on the way home after day 2 that I realized how few exhibitors I'd spoken to even though I had a long list of those I wanted to chat with. In fact I'm not sure any of them even managed to scan my badge. I also didn't get to meet many new faces although I know many were at the event for the first time. The exhibition was clearly a success with people were showing a genuine interest in the stands they were visiting rather than just killing time. APMG deserve a special mention for the mini seminars on a wide range of topics they were offering on the stand as well as some very refreshing non-alcoholic cocktails.

The real interest for me was in the first two sessions I went to on day 2.

Aale Roos and I have been collaborating for some time on the concept of Service Desk 2.0 and he has been making waves with his message that it can be useful to Unlearn ITIL. In the Nordics this has led to him being recognized as a major contributor to the ITSM industry. Having seen some of the venom that has been unleashed on him by the old guard here and on other blogs I was intrigued to see how his session was going to be received. I'd already been told there was disquiet in the iTSMF UK about its content, so I was keen to get a ringside seat.

I think Aale himself knows that the thinking behind Unlearning ITIL still needs some work. The result is that it is easy to find individual elements of the presentation to pick on and pull apart and in doing so to believe you are undermining the whole concept. I'm afraid that's exactly what one well known member of the audience did. It made for some interesting traffic on twitter.

My take-aways on the subject at the moment are:


I'm sure Aale will comment himself on whether that is a fair representation of his position, but I have to say reading what I've just written it makes perfect sense to me and echoes what I'm seeing in the real world.

Aale did make a point of stressing in the podcast that he isn't advocating throwing the ITIL baby out with the bathwater.

The session led to probably my favourite tweet of the conference, from Clare Agutter


Their tiny arms make it hard to tweet #itsmdinosaur

If retweets are anything to go by though I think Mark Smalley's session probably produced the most popular tweet of the event, and since I sent it I got the benefit of all the klout:

Mark, whose job title seems to have changed from IT Paradigmologist to Ambassador, gave an inspiring session on the reality of trying to understand the business and how BiSL might help. One comment of his that got the room clapping but divided opinion was

Let us be honest SLAs don't really capture the essence of the true service that the customer wants, and as we know metrics drive behaviours so if the targets are sub-optimal so is the service.


I spent the last two hours of the conference recording two episodes of the podcast and I really wish we'd done them as a formal session in front of an audience because the debates were really powerful. So let me thank our international band of contributors 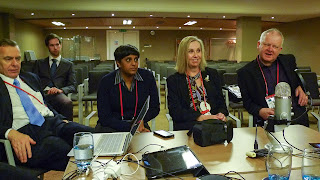 Kaimar Karu, Stuart Rance, James Norris, Ros Satar, Kathryn Howard, Kevin Holland, Aale Roos and Ben Clacy. Unfortunately my lens wasn't wide enough to get them all in. Ben's contribution was linked to the upcoming joint venture "sale" of ITIL and his time was very much appreciated when I'm sure he had better things to do with the conference coming to a close.

I did feel that both overall attendance was down, and some sessions were very poorly attended  so I'm waiting to hear what the official figures were. I did notice some companies and individuals were noticeable by their absence, and a few people told me that with money being tight they might got to the SDI conference instead next year.

Overall conclusion? As always it was an enjoyable event and it was great that this year there were a few more sessions pushing the boundaries and leaving ITIL trailing in their wake. Will I definitely be going next year? Well that depends on a lot of factors but I'm not a very representative member of the audience. If you haven't ever been to one, or you haven't been for a couple of years then I think it is a good investment.