Quiet here, isn't it? Not a lot of action since my Week in Provence, which seems like a lifetime ago.

Needless to say a lack of blog activity actually  means I've been ferociously active elsewhere, so here is a quick update.

First of all I do have a day job, and recession or not TCS continues to do rather well for itself, and I'm pleased to say that my Service Integration and IT Governance team is no exception with great year on year growth. Of course that does mean I sometimes actually have to do some work. Unfortunately the two big developments I've been working on will have to stay under wraps a little longer, but watch this space for announcements.

One TCS initiative  that I can tell you about is that we were privileged to have Mark Toomey deliver an ISO 38500 Masterclass to our team. As far as I know we are the first major consultancy to make such a public commitment to this relatively new standard. Delivered in Mark's inimitable style the course generated a lot of debate and a lot of great ideas.

Needless to say I've continued my ranting on the ITSM Weekly Podcast Rest of the World edition.  I got extremely animated about metrics, and at the live recording (sic) we made at the itSMF UK conference I voiced my concern at the lack of a sense of urgency or any call to arms from within the industry during these interesting times.

Despite my rant the conference itself was a good event. As well as the live show we collected material for two other podcasts including a "vox pops" of delegate impressions.There is no doubt that the new location is much better than Birmingham in nearly all respects, except possibly the exhibition hall. It was good to meet up with so many people, though as usual I came away not having managed to speak to many of those I wanted to. I'll repeat something I've said before and which was echoed by others - if you see any of the so called ITILuminati wandering around at these events do feel free to introduce yourself and chat to them - most of them they don't bite.

There were a number of highlights for me. Sharing  a table at the gala dinner with the likes of Ivor Evans, Phil Montenaro and John Groom brought back memories of the early days of ITIL and Stephen Mann's session on Value was a timely reminder that we can't chose to avoid key topics just because they are difficult. Hopefully I'll be contributing a guest blog for Stephen on how my pet topic of service integration can help make the value proposition more explicit.

Bright-talk ran an interesting on line summit on Service Catalogues this week, and all the sessions are available for off-line listening. I took part in the panel debate with Chris Dancy, Charles Betz and Charles Araujo. We had got some interesting questions from the audience, and some equally interesting mixed  feedback.  Clearly from some of the comments there are people who still think there are simple answers to very complex questions that lie at the heart of service management - like "What is a service?"

Chris again raised a point that I made after Pink11 which is that there are some very different perspectives on ITIL and ITSM on the two sides of the Atlantic, reinforcing the idea of two nations divided by a common language. The reasons for this deserve a post of their own.

And finally.... and probably the main reason I've been too busy to post...and as Stephen Mann has just reminded me, the ITSMWPROW News Poodles, Daisy and Darcy, produced four little news poodles. Say hello to Roxy, Digby, Dougie and Ruby 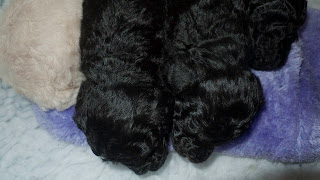