An Englishman, an Irishman and a Scot walk into a bar....

...no it isn't the start of a joke, but a scene in the Bellagio at the start of the Pink11 conference in Las Vegas earlier this year. The Irishman was Patrick Bolger and the Scot was Barclay Rae , two of my fellow presenters on the ITSM Weekly Podcast Rest of the World Edition. The Englishman was obviously me, there to present on ISO 38500 and take part in the CMDB panel discussion chaired by Rob "ITSkeptic" England.


Running into two such  great enthusiastic and  ITSM thinkers right at the start really set the tone for the whole event, even if I could have met them much more cheaply without leaving the UK. In fact in the next hour we were joined by a plethora of ITSM gurus. Those of you who have listened to our post Pink11 podcasts will have realised that Pat, Barclay and I came back buzzing with ideas, and again I want to spotlight some of these over the next few weeks.(Update - those ideas have morphed into the Back2ITSM concept)


OK, by now you will have gone away and checked the link to the conference and worked out that it took place way way back in February. So you'll have two questions.

Number 1 - When is the next Pink Conference?

Number 2 - Why has he only just got round to blogging about this?

Well there are two answers to that. The first is that I've been rather busy with the day job, and the second is that I've wanted to reflect a little before drawing conclusions.

Social Media
Not only was this a hot conference topic but it also made a huge difference to the conference experience. A lot of facetime conversations were continuations of Twitter based debates. Not only that but in the main sessions there were live Twitter feeds following the #pink11 hash tag, and that hash tag generated a lot of interest. There was also a lot of activity in the blogsphere - Barclay Rae and Matt Hooper both got very excited.

Here are some of my own initial thoughts, largely focusing on the difference between this event and similar conferences in the EMEA  region.

Back to Basics
I'm going to make a gross generalisation here. At UK ITSM conferences the presumption is we all know what the foundations of ITSM are so we don't bother questioning them, and the result is our thinking about the subject hasn't moved forward for years. At Pink there was an awareness that those foundations aren't as robust as we'd imagined. Some very fundamental issues, such as "What is a service?" and "Do you need a CMDB?" and "Do you really understand problem management?" were addressed. If you think they are trivial questions with answers enshrined in ITIl then I would suggest you probably don't understand the questions. Suffice to say at least one hastily conceived  CMDB project was publicly abandoned following the debate on their value.


Not Being Scared to Ask for Help
This kind of leads on from my last point. At UK conferences speakers stand up and tell you what a great job they've done and that they've got all the answers. If you've read my ramblings on "The Halo Effect"  and "Cargo Cults" you'll know my view of that approach. Here there was much more of a dialogue going on between the speaker and the floor, and more discussion between delegates. 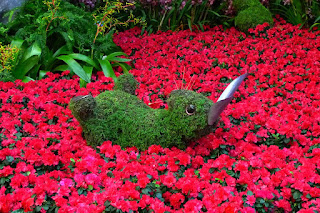 Perhaps the extreme example is the overwhelming response Pink and Hornbill have had to their ITSM Extreme Makeover initiative.

If you've never been before I really really recommend that you make the trip to next year's show.
Posted by James Finister at 10:56